Home Community Twice She Died, Only to be Saved by An ‘Angel’

Twice, mere hours apart, the dark eyes of Death stared in the face of Carol O’Driscoll. And twice, those eyes blinked first. But what really made her breathless was meeting Jesus, who had a question for her. 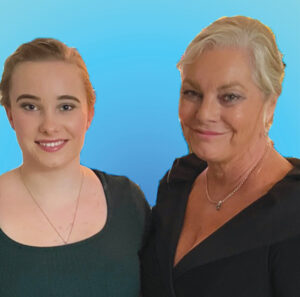 That Thursday in August had been typically busy for O’Driscoll, who is director of surgical services at Ascension Sacred Heart Bay in Panama City. Stress and chaos and lots of meetings come with the job, so after driving home she turned to gardening to relax and began trimming the roses in the back of her home in Panama City Beach. Meanwhile, her granddaughter, Faith Hanlon, who lives with her, left to run an errand.

O’Driscoll’s first mistake, she would admit later, was not wearing her garden sandals. Her feet were bare—inviting a colony of fire ants that started crawling over her left foot. A second mistake was dipping her feet in the pool to dislodge the ants. Instead, the water acted as liquid glue, attaching the ants to her feet.

“I plucked them off and walked into the house,” she said. “I was feeling weird. That’s the only word I could describe it. So I went upstairs, got my phone, and called Faith.” She asked her granddaughter to return home, and walked downstairs. “By the time I reached the bottom step, I knew I was in serious trouble. I could not get air, I could not breathe. And I had this feeling of impending doom.” She walked to the sofa and laid down.
On her third attempt to dial a second number, she reached 911 with her address and three words: “I can’t breathe.” And that’s all she remembered.

Faith is 18. Prior to continuing her studies at Gulf Coast State College, she had found a summer job as a lifeguard and swimming instructor for the city at Frank Brown Park. Her training included 48 hours of instruction, including CPR, in responding to medical emergencies. That training would save her grandmother’s life.

Faith arrived home in five minutes, with the Fire Department and the EMS team following four minutes later. “As I was driving home,” she recalled, “the weirdest thought came into my head. I was remembering CPR. So I got home and I saw Carol dead on the couch. There was no pulse, there was no breathing.

“My main job was not to get her breathing (but to) get oxygen in her system so there was no long-term-damage.” She did CPR for three minutes, then, she said, “the people with the expensive technology” took over.

Chest compressions continued in the ambulance prior to leaving for the hospital, and O’Driscoll was given three rounds of Epinephrine, a medication for cardiac arrest caused by severe allergic reactions to insect bites or stings, medicines, foods, or other substances. Once stable, she was driven to Ascension Sacred Heart.

Rather than accompany her to the hospital, Faith stayed at a friend’s house that night. “I would have been a mess” alone in the waiting room, she said.

In the hospital emergency room, O’Driscoll again stopped breathing. This time it took four rounds of Epinephrine to bring her back to life.

She remained unconscious until about 3 p.m. the following day. “I was somewhere in the hospital. I could hear Dr. (Mario) Pulido, our chief medical officer, and Dr. Blerina Begolli, chief of trauma, and a surgeon, Dr. Chris Johnson in conversation. But I could not see them. I tried to speak, but I couldn’t. I remember thinking, ‘Oh God, I’ve had a stroke. I’m going to be like this my whole life.’

“I was aware of my body, but I wasn’t in it. But when I looked over to the far right corner of the room, I saw Jesus. I knew immediately it was Jesus. He was in human form; the color brown was predominant in the aura that was around him. Although I knew there was commotion (in the room) and obviously something was going on, it was exceptionally peaceful knowing He was right there. It was OK; I wasn’t worried.

“I don’t know if He actually spoke or I just felt the words, but what I heard was ‘Come or stay?’ I thought of Miles and Matthew (her twin 9-month-old grandsons) and I thought, ‘Oh, I won’t get to see them grow up.’ The next thing I knew, I was conscious in the ICU and saw Dr. Begolli. And I could hear my daughter Laura (who had driven there overnight from her home in Charleston SC).

“Dr. Begoli explained to me, ‘You had some sort of allergic reaction. You came into the Emergency Department with hives all over your stomach and chest.’ And I remembered the fire ants.”

The diagnosis was Anaphylactic shock with cardiac arrest, the result of exposure to a serious allergen that suddenly lowers blood pressure and narrows airways, blocking normal breathing. In this case, it was fire ants. “It just overwhelms all of the organs and, as such, it overwhelmed my heart,” O’Driscoll said.

On Tuesday—five days after she decided to trim roses—a defibrillator was implanted. The device sends an electric pulse or shock to the heart to restore a normal heartbeat. The next day she was released and has since returned to the hospital—this time as an employee and not a patient.

She is understandably amazed—and proud—of her granddaughter. “In my career, I’ve seen seasoned professionals freeze in delivering care when it is a family member, a friend, a neighbor,” O’Driscoll said. “They just can’t emotionally keep their wits about them. And then I look at Faith.”

She is indebted to the Aquatic program run by Panama City Beach that just two months ago taught Faith the skills that allowed the EMS team to bring O’Driscoll back to life. Her CPR instructor was Dennis Peters, who said he was happy she was able to use that training in such a remarkable way.

O’Driscoll would like to see CPR training made available extensively in the community, rather just for those who need it as a job requirement. “It would be my prayer that before they graduated, every student at least had exposure to CPR so they would have a fighting chance of helping to save someone in their life…. It is the ultimate gift of love.”

One gift that is particularly precious to O’Driscoll is the care she received at the hospital where she typically cares for others. The three physicians she heard as she awoke had just finished the last meeting the night before when they learned about the emergency, and they remained at her bedside until she was stabilized, then returned the next day. She received a note from Dr. Pulido telling her how proud he was to serve a colleague. He said, “We stood there elbow to elbow, knowing we were marching into health together as we cared for you.”

Not surprisingly, O’Driscoll has a new appreciation for life. “It is with intense gratitude that I get to stay here… I have a very different outlook. I let go of the nonsensical parts of life and those trivial things that can cause such intense pain.”

And she no longer fears death. “I tasted a little bit of what’s on the other side, and it is kindness and love.”

As O’Driscoll sees it, the angels were flying almost on the ground on that Thursday, intent on taking her away. But her own angel, Faith, convinced them otherwise.

Peter Fischetti is a retired journalist who lives in Panama City Beach.