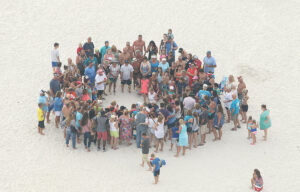 A small crowd packs in around a seemingly random sandy beach spot one muggy afternoon in late August. Barely visible between all the shoulders and elbows and cellphone cameras is a Turtle Watch volunteer, carefully excavating a sea turtle nest. She sets aside a number of failed eggs, and then: a survivor! She gently retrieves a wiggling hatchling from the nest – and the crowd goes wild. Conscientiously monitored throughout the nesting season and marked off to prevent unwary visitors from trampling it, this turtle nest is one of many the nonprofit organization, Turtle Watch, tends to each season. The process of nest excavation allows them to evaluate the success of a nest by counting hatched and unhatched eggs. This is required by Turtle Watch’s state permit as it’s an important metric for biologists monitoring how the sea turtle population as a whole is doing. 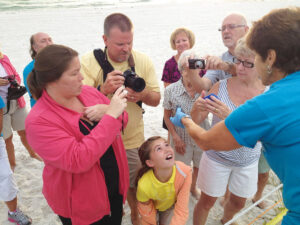 Kennard Watson, the Turtle Watch director, heads a devoted team of volunteers and surveyors who patrol the beaches daily during turtle nesting season, officially May through October, with funding provided by the Bay County Tourist Development Council to support the daily surveyors. They’ll be the ones out at first light searching the sand for any sign of turtle tracks. Though later in the day, foot traffic can wipe out signs of a turtle’s passing, when they’re first made it’s quite obvious. “It’s like a tractor has come out of the water,” says Watson. With any luck, these tracks will lead to the real prize: a fresh nest. As sea turtle populations continue to struggle, these nests are always a welcome sight. Loggerheads are the most common sea turtle along our stretch of coast and the most common nester locally, but there are also a handful of threatened green turtles that happen this way, along with the occasional endangered leatherback turtle. The latter is the largest of all sea turtles and can be the size of a small car, up to seven feet long or more, explains Watson. “We had one back a few years ago that nested behind Schooners restaurant, and that was fairly early in the evening so that definitely attracted some attention,” remembers Watson with a laugh. While the eggs of loggerheads might be the size of golf balls, these lunker leatherbacks can lay eggs the size of oranges, as long as they aren’t frightened off before they have a chance to nest.

This, in fact, is one of the main problems facing sea turtles: a loss of nesting habitat. Development adjacent to beaches and heavy beach traffic can create lights (and noises) that might cause a turtle to plow its way right back to the surf without laying a single egg. In the years immediately after the Deep Water Horizon oil spill nesting numbers were encouraging, however, in the last five years, the nesting numbers have gone down again. “The best we can say at this point is that the population is not showing signs of recovery,” says Watson. No one is entirely sure why numbers are dropping now, but in addition to all the issues caused by beach development, major storms certainly haven’t helped the situation, creating storm surge that can flood nests on the beach or wash eggs away.

While storms aren’t preventable nor the loss of nesting habitat entirely reversible, there are ways to at least lessen the impact. “The local government is trying to address the problem through lighting ordinances that require shielded, wildlife-friendly lighting that uses an amber light source that’s not as attractive to sea turtles and birds, and can’t be seen from the beach,” explains Watson. Not only do bright lights serve as an obstacle for nesting turtles, but they also create problems for the hatchlings who have a hard time finding their way to the water when disoriented by bright lights. The solution is to reduce lighting on the beach as much as possible during nesting season (May through October); maintaining a sand dune buffer between homes and the sand also helps (so don’t walk on those dunes). Beach-goers can do their part as well. “Fill your sandcastle holes, throw away your trash, minimize the use of lights on the beach at night. Those three things can help us a lot,” Watson says.

Interested in watching a nest excavation? Follow Turtle Watch on their Facebook page, www.facebook.com/Panama-City-Beach-Turtle-Watch-125397917484930, where nest excavation locations, dates, and times are posted. Though nesting season officially starts at the beginning of May, nests take around two months to hatch with the first hatchings taking place in July and continuing into October. Turtle Watch leaves a comfortable margin past hatching dates to be sure they’ve given the 100 or so eggs in each nest time to hatch on their own. In the meantime, be sure to check out their website, http://www.turtlewatch.org for more on the organization, or visit Gulf World Marine Institute’s site, www.gwmi.info/turtle-rescue, to learn more about local turtle rescues. And finally, if you’re lucky enough to spot a turtle laying a nest or hatchlings on the beach (specifically on the beach stretching between Camp Helen State Park and St. Andrews State Park) please call the Panama City Beach Police at (850) 233-5000 to report it; they’ll let Turtle Watch know it’s time to send in some troops. And finally, on behalf of all the sea turtles out there, remember to leave those beaches clean, dark, and flat!