James and Tracy Talley have a thing for birds – it wasn’t an intentional thing, but it’s a thing. Or as James Talley tells it, neither of them can remember actually having the conversation about starting a bird sanctuary, it just happened. “How do you wind up here?” he wonders with a laugh. “Here” is the Tranquility Manor Bird Rescue and Sanctuary, a non-profit based in Panama City Beach that rescues birds in need, and they’ve been at it for close to 15 years.

“How we got started,” Tracy Talley explains, “was that we had a friend that moved and couldn’t take their bird with them.” Over the ensuing years, their aviary has included in its numbers green-cheeked conures, sun conures, cockatoos, cockatiels, many macaws, African grays, assorted smaller birds, and more. “God brings them to me,” James says. They always hope for level one rescues when they get them. Level one is a bird that’s been well-fed and well taken care of, but the sad reality is that to date, they’ve only had one. All the rest have required considerable TLC. 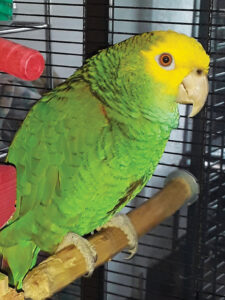 Why are there so many birds in need of rescuing? The unfortunate truth is that there’s not much education provided to new bird owners buying from a breeder. No one sits them down to explain that a macaw can live to be 80 or 90 (it’s essential to designate the next caregiver in one’s will), and the long-term work involved. Neither do they cover what foods to avoid – or what chemicals can kill. For example, though some might know that the Teflon coating on cookware when heated vents fumes toxic to birds, fewer realize that even burning candles can cause severe respiratory distress; absolutely fatal are the vapors released by chlorine bleach (found in certain Clorox products). Furthermore, some foods are poisonous to most birds, while some are appropriate for select species, but not others. Another area for vigilance? The cardboard boxes that many parrots love to chew. Since the start of Covid, boxes have been regularly sprayed with a disinfectant, which can then be ingested by any creature inclined to give them a good nibble (food grade boxes are the answer, according to James). Even traditional pet-store cages are cause for caution – a strong macaw, like the blue and gold macaw the Talleys rescued, can bite and move the bars of a cage if the cage isn’t sturdy enough; keep in mind that the bite pressure of one of these bigger birds is as high as 600 psi, which is on par with the bite pressure of a Doberman, and significantly more than a human’s, which peaks around 70 psi. 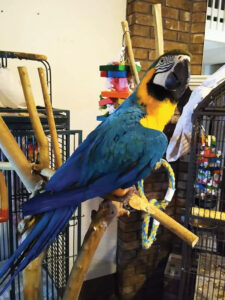 With all this in mind, it’s not hard to see how an uninformed bird buyer might be woefully unprepared for the responsibility of raising a winged pet. This is where the Tranquility Manor Bird Rescue and Sanctuary comes in: it’s there to try to rehabilitate and rescue whenever possible. Right now, the primary limiting factor for expanding this sanctuary is space. The Talleys are in the process of looking for a property in the area that has 20 acres or more where they can house rescues and even potentially board birds (some birds, like quaker parrots, are illegal and can be euthanized in certain states, making travel with them perilous for their loving owners). This is less straightforward than it sounds because birds need to be separated by their continent of origin to ensure any of their native bacteria or parasites don’t spread to birds who might find such foreign hitchhikers hazardous.

Additionally, any boarded bird (or new addition to the flock) must be kept in quarantine, separate from all the other birds for 30-90 days to be sure they are free from any contagion that could potentially spread to the others in the aviary. Then there are smaller birds, which require space to fly, and, along with the larger birds, need a special micro stainless steel mesh roof strong enough to withstand 600 psi of bite pressure on the inside and predators on the outside. In other words, an undertaking of this scope isn’t for the faint of heart.

To bring this plan to fruition, the Talleys will be organizing fundraisers this next year, and are always happy to accept donations. For more information on some of their rescues, or for ways to donate, find them on Facebook at facebook.com/TranquilityManor, email James Talley at tranquilitymanorbirdrescue@yahoo.com, or call (850) 238-0675. 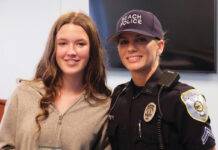 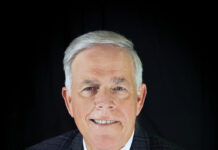 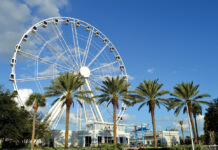 Rise Above it With Panama City Beach’s SkyWheel