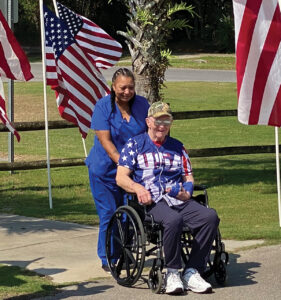 Baseball legend Yogi Berra famously said “It’s fun; baseball’s FUN.” That was so true on May 17 when the Veterans of Sims Nursing Home arrived at the Miracle League Field at Frank Brown Park. The big Annett charter bus arrived with an escort by Panama City Police, Panama City Beach Police and the Bay County Sheriff’s Department. The Veterans were greeted by a flag line of appreciative fans as they made their way to the field dugouts. The flags were graciously provided by John Reichard, who made sure that they were there to create that awesome welcome.
Patriotic music was playing and it just kept getting better and better as the whole event unfolded. The Arnold High School JROTC provided the Honor Guard to present the colors. Everyone watched and listened as Neysa Wilkins wowed all with her singing of the national anthem. Then the Veterans took to the field to play the game they were there to play. 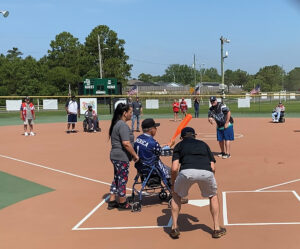 Introducing each Veteran and hosting the game was Way Campos Foy, who kept everyone aware of the action on the field. Veterans from World War II, Korea, Vietnam, and from every branch of the military began to bat, run (some via wheelchair or walker) the bases, field the hits and work their way to home plate. Each Veteran was given a game medal by Coast Guard Auxiliary Flotilla 1-9 Vice Commander Michael Fitzgerald to recognize their service and participation in the game. They played, fans cheered, and the Veterans enjoyed a day of being out and about. Culvers Fresh Frozen Custard was given to the Veterans after the game before they headed on back to Sims to enjoy a fabulous lunch provided by Wicked Wheel and desserts from the Breakfast Point Publix. 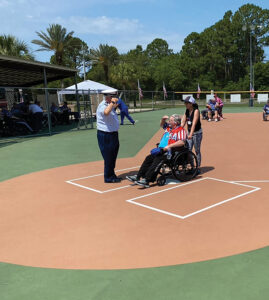 The driving force behind this exceptional event? The Rotary Club of the Emerald Coast under the leadership of President Mary Pat Zebroski. Their efforts included securing a district grant from Rotary International to host this event and several others for the Clifford Chester Sims State Veterans Nursing Home, as well as working with donors and the Parks and Recreation Department of Panama City Beach. They also brought in a Rotary Community Corps Special Ops member, Keith Dimick, to pitch and catch for the game, plus double-checked each detail to be good to go.

Was it all worth it? You bet, because the Veterans at Sims deserve some outside fun on a beautiful spring day. This baseball game met that description of baseball great and Navy Veteran Yogi Berra, it was FUN! The Rotary Club of the Emerald Coast is known for bringing fun and happiness and help to Panama City Beach by its service to the community. Find out more about this club, and next year’s Veterans’ game, by emailing ecrotarypcb@gmail.com.