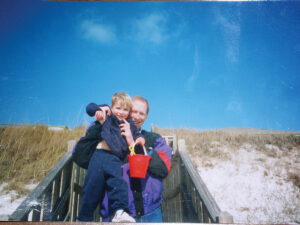 Once upon a time not so long ago, there was no bridge over Lake Powell. In fact, there wasn’t even a Lake Powell, known then instead as Lake Powiller. There was no Camp Helen State Park, no Pier Park, no Northwest Florida Beaches International Airport nor many of the other amenities locals – and visitors – have come to appreciate. Seaside? Rosemary Beach? Not there. And aside from a few fledgling feeder roads linking what is now US 98 to beaches west of Inlet Beach, no 30A. It’s the unexpectedly intriguing history of 30A specifically that Robert O. Reynolds brings to life in his book “Pathway to Paradise on Florida’s Emerald Coast.” Though the emphasis is on a region west of Panama City Beach, there are enough familiar names and places included to make this of interest to anyone who’s spent so much as a week in the area, with surprises to also hold the attention of those long-term residents who’ve seen it all.

Reynolds isn’t a historian by trade, nor from the area, but he’s been coming to the region since the 1950s, which gives him perspective (and anecdotes) that those who have more recently discovered the treasures of the Emerald Coast wouldn’t otherwise be privy. “I was raised in Montgomery, Alabama,” Reynolds explains. “My father was a radiologist, my mother was into all kinds of things – she’s sitting there in Montgomery and there’s no ocean. Everyone goes to the lakes. We did a little bit of that, but that wasn’t enough for my mother.” They started making summer sojourns to Destin. “Once she saw the Gulf Coast that was it. Forget the lakes,” he remembers with a laugh.

Over time, they started exploring coastal communities like Panama City Beach, Seacreast, and finally Seagrove, where they eventually bought their summer residence. A developer from Panama City, C.H. McGee, Sr., had purchased 160 acres of land right on the gulf for $75,000 in 1949; this land became Seagrove Beach, an intimate community in those days with amenities limited to the tiny Seagrove Beach Real Estate office and Seagrove Village Market. The latter kept visitors stocked with groceries and gasoline and boasted the area’s lone payphone while the former handled would-be home owners who had discovered the appeal of gulf-coast living. And forget a quick trip over to Grayton Beach: In these days, there were no connector roads between coastal communities. Any east-west movement required driving back to what is now US 98, over, and then back to the coast. It wasn’t until the mid ‘70s that 30A drivers could start in Grayton Beach and make it all the way to Inlet Beach via Seagrove.

After his death in 1954, McGee Sr.’s son, C.H. McGee Jr. (aka “Cube), took over Seagrove, selling the Reynolds family their home and teaching young Robert how to drive a jeep on the sand. John Fonville (of Fonville Press association) was another local. “I used to go observe the stars from the bluffs up there,” remembers Reynolds. “John Fonville lived behind us, and I would go to Fonville’s house and get his tarps to hang up to block the light from streetlights and neighboring homes so I could see the fainter stars.” Reynolds interest in his natural surroundings didn’t end with astronomy however, and there’s a chapter devoted specifically to “Plants You’ll See on 30A,” another on coastal dune lakes and still another on the creatures inhabiting this stretch of coast. Of course, local communities such as Seaside, Alys Beach, Rosemary Beach, and Santa Rosa Beach take the spotlight, but there are plenty of other honorable mentions. Happily for the reader his tome also includes background on Eden Gardens, now a state park, but back in the day the area’s most note-worthy haunted house.

For a deeper dive into the region’s secrets and favorite communities, track down a copy of “Pathway to Paradise on Florida’s Emerald Coast” at Sundog Books in Seaside, Hidden Lantern in Rosemary Beach, Seagrove Village Market in Seagrove, or find it online at emeraldwaterspress.com and Amazon.com.