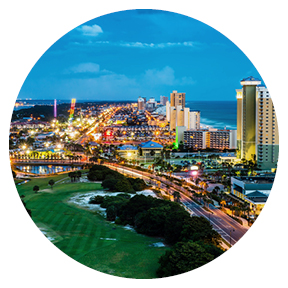 In the aftermath of unprecedented civil disorder by hundreds of out-of-state troublemakers during the last weekend in March, Police Chief J.R. Talamantez raised the primal issue confronting Panama City Beach:

“We have to figure out what kind of a city we want to be,” he told City Council during an emergency meeting on April 1.

Sparked by an out-of-state social media campaign calling for a “Panamaniac” takeover of the city’s streets, thousands of out-of-state men, including known street gang members, swarmed the Beach on Saturday and early Sunday, March 26-27. The crowds shut down streets, and engaged in mass looting and other criminal acts that area business leaders said terrorized residents and early family visitors to the city.

Forewarned of the event by social media posts, City Manager Drew Whitman and Chief Talamantez prepared the best way they could, by contacting other local and state law enforcement agencies for reinforcements. More than 130 law enforcement officers were on the streets – nearly twice the city police department’s entire 77-member roster – when the unruly crowds began their rampage.

“These weren’t college-age people coming down here to have a good time,” a furious Mayor Mark Sheldon told the packed City Council chamber. “These are people who came here to be lawless and nothing more. They came here to wreak havoc, and that’s what they did.”
When the night of mayhem had ended, police had arrested 161 people on a total of 120 charges, including 60 on gun charges and 70 for illegal drugs. Police reports showed that half of those arrested had come down from Alabama, where the unsanctioned “Panamaniac” gathering had been heavily promoted. Police seized 75 illegal weapons, including a number of AR-15 assault rifles.

Sheldon and Council members – along with dozens of residents at the April 1 meeting – showered praise on law enforcement members who braved the chaos to reassert control and arrest wrongdoers.

One weapon that proved vital to their effort was the Bay County Real Time Operations Center, a collaborative effort between the Bay County Sheriff’s Office, other local police departments and participating businesses. The network provides relevant video and other information directly to law enforcement on the streets. Operating since last November, a primary element of BAYROC is a network of traffic, school and participating business video cameras to assist law enforcement officers responding to a crime.

Even so, Beach officials realized that more is needed to prevent future mob invasions. Sheldon and Council members have taken swift action to bolster the city’s defenses. During the emergency meeting, Council held the first reading of an emergency response ordinance that Sheldon said will provide the city with the ability not only to respond more rapidly to such an emergency, but to take pre-emptive action in the face of an impending threat.
Drafted in the days following the unrest, Ordinance 1586 authorizes the city manager to declare a state of emergency in lieu of requiring an emergency City Council meeting to formally vote on such a measure. “We wanted to give the city manager quicker authority,” Sheldon explained. “It can take up to six hours (for the council) to call an emergency meeting. … (With) this, we’ll go from six hours to six minutes.”

The emergency powers authorized in the ordinance include:
• The establishment of curfews in all or part of the city;
• The prohibition of the sale, distribution, or service of any alcoholic beverage;
• The prohibition of the possession or consumption of alcoholic beverages other than on a person’s own premises;
• The closing of any area of public or private gatherings;
• The prohibition of the rental or operation of any low-speed vehicle, golf cart, or other vehicles found to be “incompatible” with normal and safe traffic flow;
• The termination of utility services at any real property address;
• The suspension, revocation, or denial of any previously granted special event permit;
• Authorization for city personnel to enter private property and provide “emergency nuisance abatement” if needed, and for city personnel to provide emergency assistance to private property or businesses critically affected by the declared emergency;
• The authorization to close any public beach access or portion of the sandy beach.

In addition, the new ordinance will grant the city manager the power to enact “advanced preventative measures” if it is determined that “a reasonable likelihood” exists that a civil emergency will occur in the city within the next 12 hours. This includes the ban on low-speed vehicles, canceling special event permits, use of city property to detain or impound persons or property, and beach closures.

Sheldon told the meeting that the ordinance balances the need for action in a civil emergency against the constitutional rights of people, including visitors. A declared state of emergency will automatically expire after a maximum of 72 hours and a formal City Council vote is required to extend beyond that period.

Whitman told PCB Life that the measure will give the city “the ability to quickly and effectively reduce dangers and disburse dangerous crowds as well as congestion in areas where we see a high amount of vehicle and pedestrian traffic.”

“The hope is that it will alleviate any type of mob mentality from the very beginning,” Whitman added.

Passed unanimously at the first reading, Ordinance 1586 was scheduled to undergo a second reading and final vote by City Council at its April 14 meeting.