The transformation of the Panama City Beach “island’’ is underway.

Throughout the 50-year history of Panama City Beach, this coastal resort city has rested within a narrow corridor between the Gulf of Mexico and a seemingly endless swath of forests and swamps to the north of Panama City Beach Parkway. But signs are everywhere that the “island,” along with the West Bay area, is beginning to undergo a profound growth that promises to bring in more than 300,000 new permanent residents within the next four decades, including 70,000 by the year 2025.

This unprecedented migration will be split between “active adult” retirees and younger people attracted to the new jobs and housing opportunities generated by the creation of what would today be the fourth-largest population center in the state of Florida – larger than Orlando and just slightly smaller than Tampa. They will reside, work, and play in a newly created urban and suburban community stretching from the current city limits north to SR20, and lying between SR77 and Point Washington State Forest in Walton County.
“They are coming in from all over,” said Catherine McCloy, director of planning and development for the St. Joe Co. since 2018. “The region as a whole is seeing an influx from all over the country, particularly since the pandemic.” The trend is expected to continue and expand over the next four decades, she added.

To accommodate that population boom, the St. Joe Co. in 2015 revised and enlarged the growth plan for its holdings in western Bay and eastern Walton Counties. Nearly two decades after unveiling an initial plan for the West Bay sector anchored around the Northwest Florida Beaches International Airport, company officials received approval from state and county officials of an expanded plan now totaling 110,500 acres – including 97,216 acres in Bay County and 13,284 acres in adjacent Walton County. Now after nearly six years of planning, permit applications and other preparations, the sector plan has suddenly sprung into life along a swath of the SR79 highway corridor. Four ongoing or planned projects include: 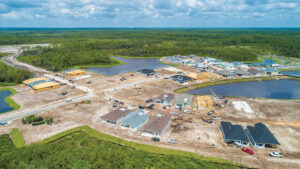 • Latitude Margaritaville Watersound: Four months after sales opened on the initial phase of 249 homes in the adult active community, more than 200 homes are under construction or in the final planning stages. When fully developed with 7,000 residential units, the community will include a town center with recreational and commercial amenities, and a full marina on the Intracoastal Waterway.

• Ward’s Creek: Contractors are currently clearing land along the east side of SR79 just north of the Phillip Griffitts Parkway for what will become a 1,100-acre residential community straddling both sides of the highway. The project when finished will have 1,600 residential units.

• Four corners: The intersection of Phillip Griffitts Parkway and SR79 – currently a tree-lined landscape all around – will be the site of a separate town center containing commercial, business and retail amenities serving both the Ward’s Creek population and other local residents.

• Hospital: St. Joe Company officials announced last April 8 plans to build a new 100-bed hospital an 87-acre tract located on the southeast corner of the intersection. Tallahassee Memorial HealthCare and Florida State University’s College of Medicine are partners in the project. A construction date has not yet been set.

And this is just the beginning.

Ultimately, St. Joe officials envision a series of planned residential communities, with adjacent town and village centers providing recreational, service and entertainment amenities, that will serve a maximum population of 350,643 people, of whom all but 48,739 will be full-time residents. Current plans are for the construction of 29,000 residential units throughout the sector by the year 2025, adding about 70,000 new residents to the current PCB population of 18,000 – a nearly fourfold increase. Other elements of the final plan include:

Even with that degree of development, more than 53,000 acres of the 110,000-acre tract will be left permanently undeveloped as conservation or preservation space, McCloy said.

A major premise of the Bay-Walton Sector Plan is that between 40 and 60 percent of the new housing will be “deed restricted” for what planners call the “active adult” population 55 years and over, McCloy said. One benefit to local government from this factor will be a lessened impact on public schools, and a lower average population per household (1.9 for seniors and 2.8 for younger families).

McCloy cautioned that the sector plan figures represent a maximum cap on planned development within the 110,000-acre tract that might change depending on future economic trends and unforeseen events such as a major hurricane. “This is not a hard-in-fact rule,” she said. “It’s a concept of what could be.”

While the sector development promises to totally transform western Bay and eastern Walton Counties, McCloy said that the pressure for growth would be there regardless. “The point is to plan well for the people who are coming, and to create a community where people will want to live,” she said. 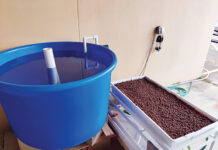 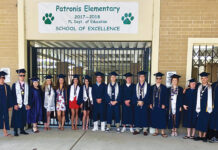 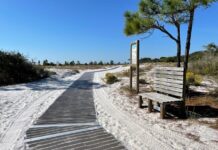