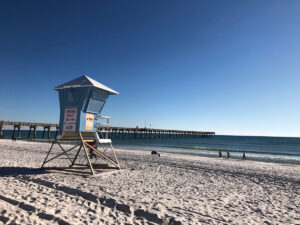 Every year, beachfront resorts along the Gulf of Mexico entice prospective visitors with advertising campaigns that tout direct access to the sugar sand beach and emerald-green waters.

Beginning in April, visitors to one PCB resort will find a unique addition to the list of amenities: enhanced beach safety.

Boardwalk Beach Hotel & Convention Center has become the first tourist destination on Panama City Beach that will include a manned lifeguard program for the benefit and safety of its guests, said Michael Greer, vice president of Royal American Hospitality Inc., the resort’s management company. Boardwalk Beach includes the convention center and two hotels at 9600 South Thomas Drive. The lifeguard program will cover the 900-foot segment of the beach in front of the two hotels.

“Internally at Royal American, we have discussed many times over the past ten years a desire to have lifeguards on our own beach,” Greer told PCB Life. But as with other beachfront tourist accommodations, the “extreme cost” of liability insurance long made such a program prohibitively expensive, he said.

What has made the program possible is a public-private partnership between the city and Boardwalk Beach in which the business pays for the equipment and operating costs while the city hires, trains and assigns lifeguards to the resort. Under the partnership, the lifeguards are deemed city employees and thus fall under the $200,000 liability cap set by state law for municipalities.

The lifeguard program at Boardwalk Beach promises a new era in beach safety for the local tourism industry, Greer and City Councilman Paul Casto agreed in separate interviews.
“They are the first,” Casto said of Board Beach.

The lack of beach lifeguards along the twenty-two-mile Gulf beachfront has plagued the regional tourism industry for decades, with recurring spikes in drownings. Since 1982, public records show that 235 people lost their lives while swimming in the Gulf here.
Experts have long cautioned that the underwater topography of the beach and prevailing gulf tides regularly generate dangerous rip currents that can appear with scant warning and overwhelm even the most experienced swimmer. In response, the city and Bay County for years relied on the familiar colored flag-warning system to alert beachgoers of dangerous conditions. Beach safety experts have decried the flags as ineffective without the presence of manned lifeguards.

After twelve people drowned in the Gulf in 2019, the PCB City Council reversed decades of opposition and organized a manned lifeguard program with stations at the Russell-Fields Pier and roving patrols for the rest of the city’s 9.2-mile beachfront (with the Bay County Sheriff’s Office providing patrols along the county beachfront). City Council also toughened beach safety ordinances that include a $500 fine for swimmers entering the water when double red flags are flying.

Operated by the Beach Safety Division of the city’s fire rescue department, the public lifeguard program in 2022 will have a $1.056 million operating budget with seven full-time positions and about 15 seasonal lifeguards, said city spokeswoman Debbie Ward.
City Council first unveiled the public-private partnership concept in 2020, but the outbreak of the COVID-19 pandemic earlier that year delayed implementation.

Under the partnership, Boardwalk Beach will pay the city $129,477 this year, which includes a one-time charge of $43,836 for equipment and $85,641 for personnel costs. The program will feature a lifeguard station along the Boardwalk beachfront with a minimum of two lifeguards on duty from 10 a.m. until 6 p.m. each day between April 6 and September 6. All lifeguards will be certified for “open water” rescue as dictated by the United States Lifesaving Association.

“The City will monitor persons present on the beach and swimmers within the designated lifeguard areas… and educate them on the beach flag system, rip currents, surf conditions and safety issues,” the agreement states. “In addition, the City will provide and coordinate rescue activities and emergency response.”

“They are the first,” Casto said of Boardwalk Beach.

Both Greer and Casto expressed disappointment that no other resorts to date have signaled an interest in participating in the public-private venture.

“The private sector benefits greatly from this beach and emerald water, it’s the number one attraction why our visitors travel here,” Greer said.

Casto said he hopes Boardwalk Beach’s lifeguard program will still encourage other businesses to participate. “Maybe the rest of them are sitting around and waiting to see how this comes out,” he said. “This may bring other resorts to join.”

Meanwhile, Greer said Boardwalk Beach plans to include its unique lifeguard program as a selling point for tourists. “We want every visitor to PCB to know that the world’s most beautiful beaches are also safe – and which one(s) are the safest.”