#Crushingadhd is a social media site on Instagram and Facebook that was formed by local resident Sandy Boswell in 2017, to educate and support adults with ADHD and their loved ones. Sandy considers herself an ADHD, mental health advocate and an ‘encourager,’ often sending materials out to followers around the world, where help and recognition is not found in their countries. 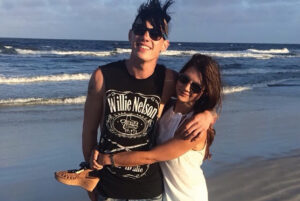 It was only a few short years ago that Sandy made the connection between her son Michael’s struggles as an adult and his childhood ADHD. The lightbulb came on when Michael showed his Mother that he had over 200 unanswered text messages on his phone and over 25,000 unopened emails. A huge deal when you consider that Michael is a California-based musician and a model, who gets almost all of his work via email.

Sandy did what many would do – she started “Googling” and soon realized, based on Michael’s ‘symptoms,’ that there was indeed a correlation between Michael’s actions and his childhood ADHD diagnosis. Sandy had no idea when Michael was first diagnosed with ADHD in First Grade that his childhood diagnosis would continue through adulthood. Based on this new found information, Sandy started reading everything that she could get her hands on for the subject and found so many articles that matched her son’s symptoms. Finally, there was a reason for all the ‘bad luck’ his Mother had perceived Michael was having in his life.
Since then, Sandy has committed to educating herself on every facet of Adult ADHD. Here are just a few of her findings:

What is adult attention-deficit/hyperactivity disorder?
While the exact cause of ADHD is not clear; genetics, the environment and developmental problems in the central nervous system may be involved. Research has shown that only one third of children actually outgrow childhood ADHD.

Symptoms usually present themselves early in childhood but in adults are often masked by other conditions, such as anxiety or depression. ADHD is a mental health condition that includes a combination of persistent problems, such as difficulty paying attention, hyperactivity and impulsive behavior. Adults with ADHD can have unstable relationships, poor work performance, and low self-esteem.

Treatment generally includes psychotherapy, coping skills and medication, both for ADHD and other mental health conditions, which may be present as a result of ADHD. While none of these treatments alone are considered a cure, a combination can help manage many of the symptoms.

One of the biggest challenges facing adults with ADHD is the ability to even find and access appropriate treatment. Children are generally covered under their parent’s insurance; parents schedule their medical appointments and oversee the use of any prescribed medications. But for adults the story is quite different. First the adult must be high enough functioning to have and keep a job, so as to have some form of insurance. They have to remember to make and keep doctors and therapist appointments, and remember to take their medication responsibly and consistently. Even purchasing the required stimulants from a pharmacy can prove a major hurdle for someone with Adult ADHD. Then there is the added complexity of actually finding someone trained to treat their disorder. Most therapists and Doctors are only trained to treat children with ADHD, and depending on where you live, resources may be very limited to non-existent.

We all know that exercise is considered a great way to relieve stress, work off excess energy and boost your endorphins, so it can be particularly helpful to those suffering with ADHD. Additionally, adults with ADHD are encouraged to make lists to stay on track with tasks that need completing. Another good tip, is using a timer to complete tasks that should be accomplished in a reasonable and/or set period of time, such as taking a shower or turning in a work report.

Those of us who do not suffer from ADHD often underestimate the significant issues that adults with ADHD face every day, often dismissing their struggles because they expect them to do the same activities as they do without a problem. One of the many issues facing adults with ADHD is having to cope with the fact that their disability is, for the most part, ‘invisible,’ so they are judged as ‘normal.’ Ergo they are often viewed as failures because they are unable to cope in certain situations. Admitting to having ADHD often has a similar negative impact, so more times than not it is a no-win situation.

Sandy actively encourages anyone with an ADHDer in their life, to educate themselves on exactly what ADHD is, because those living with ADHD, are trying hard to function and can feel great rejection, loneliness, and isolation from the people that they love, all while giving the outward appearance that everything is fine.

Sandy Boswell is an independent benefits consultant for Aflac and resides in Panama City Beach. Prior to moving to PCB in 2016, Sandy and Floyd, her husband of 17 years, lived in West Point, Virginia where Floyd served 30 years in law enforcement, and Sandy 25 years in the Pharmaceutical industry.