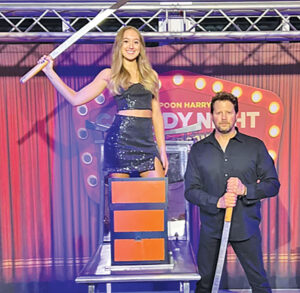 There’s a new act in town, and it’s well, magic. Literally. And funny. Also literally. Andy Gross, a magician slash comedian slash ventriloquist is Harpoon Harry’s “magician in residence” this summer, and he’s here to mess with your mind (in all the right ways), make you laugh, and possibly even make you forget your sunburn (though no guarantees). Harpoon Harry’s is just the right sized venue to get up close and personal with Gross’s performance too, from his more traditional tricks (aided by local magician’s assistant, Emma Corbell), to fresh takes on ventriloquism, with engaging slight-of-hand acts and plenty of audience interaction to keep things moving.

Gross got his start at the tender age of nine after watching the movie, “Magic.” Forget creepy clowns – here the plot centers around a ventriloquist and his creepy dummy. Gross was sold. “When I saw that I was asking my parents, ‘How did they do that, how did they do that?’” His parents sent him to the library to find out, and when a ventriloquist came to his hometown of St. Louis, Missouri, his mom tracked him down and got the young Andy signed up for a mail order course on voice throwing. Gross would record himself throwing his voice, and send the tapes back for critique. “I’d wait by the mailbox for that tape to come back,” he says with a laugh. With some saved birthday money, he bought his first professional dummy for $142, one with eyes and eyebrows that moved. “I took it with me everywhere.” From ventriloquism, it was an easy jump to magic. “After that I had a friend about my age who did some card tricks, and he showed me a couple of card tricks, and I was hooked,” remembers Gross. As the self-described class-clown, the comedic component of his performance came naturally.

However, it wasn’t straight out on stage for Gross, but rather to the racquetball courts. By the time he hit 15, he was professional racquetball’s youngest player. His savvy on the courts earned him numerous tournament wins and other accolades until at 26, he hung up his racquet and took his other show on the road. Since then, he’s made appearances on assorted tv shows and been a guest on “The Ellen Show,” gone viral with his “Split Man” videos, and made thousands laugh with countless stage performances from coast to coast.

These days, an often grueling travel schedule doesn’t faze Gross. “I’m kind of a road warrior, I absolutely love it,” he explains. However, with four children (all of whom are also in one form of show business or another), it can be a challenge to get everyone in the same place at the same time. Which is why when Harpoon Harry’s, a well-known PCB beach-side hot-spot, invited him to come for the summer (after he took the stage several nights back in November, 2021), he jumped on it. “I thought it would be great that the kids can come here and have a place for the summer,” says Gross.

To see the magic happen first hand, be sure to catch Gross this summer, Wednesdays-Sundays through mid-August at Harpoon Harry’s. His show is rated PG-13, and tickets are available for advance purchase at harpoonharrys.com. Doors open at 9 p.m. Get a sneak peak of Andy Gross in action in his hit “Split Man” video on YouTube at https://youtu.be/R32by29mSsE or google “Andy Gross Live” to find his youtube channel where he uploads new video clips regularly.